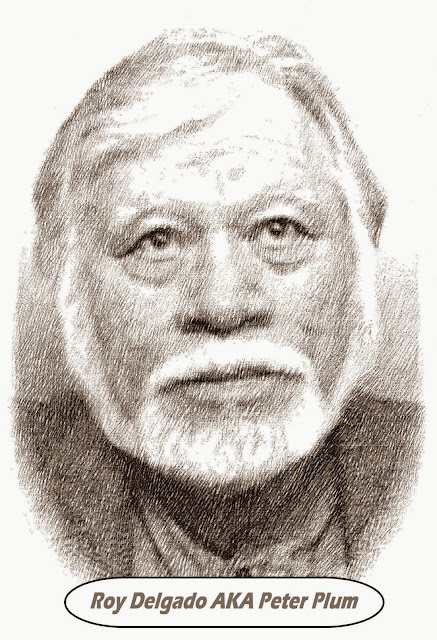 Although I showed this awhile back, I thought it would be
important to show it again for any new viewers.

What is absolutely fantastic about this, is
that it only took about 3-5 minutes, if I
remember correctly.

I saw a small booth in the aisle of a large
Shopping Center in Woodbridge, Virginia.
The booth size was similar to the ubiquitous "FOTO-MATS" DO-IT-YOURSELF-type photo booths
that you still see around.
( of course, they just shoot regular photos ).

The samples displayed on the outside of the booths caught my eye . . . some were teenagers, some middle aged people and some were old saps like myself.

They absolutely looked like they were drawn
with a soft pencil.  I KNEW 30 years ago this would happen.
Now it is finally here . . . and all for just a few quarters or dollar bills.  I forget exactly how much.

After inserting the money into the machine,
you slide the little curtain open and you sit and look at the hidden camera straight ahead, which looks like a mirror with a pinhole . . . what happens is you notice a soft  horizontal swath of 'air brush' - type light, about an inch wide, slowly starting at the top and the left corner moving across the entire image on the mirror slowly moving, and
traveling across and then moving down and overlapping about an inch and then it goes straight across and repeats itself until it finishes at the bottom of the 'drawing'.

After just a few minutes out comes the 'drawing' on
regular typewriter size heavy paper.

I think the machine was called The MICHELANGELO,
I'm pretty sure.

or, how about The BYRNES MACHINE ?  Maybe that's why he loves the pencil now, and is planning for his OWN machine sometime in the future ?

I'd PAY five dollars to have my pic drawn by
"THE MANKOFFER"
( Not the machine, but by the man ! )

I feel like I'm on a treadmill and every day for the last ten years someone keeps increasing the speed . . . where now I'm running like hell faster than I've ever run before,
and slowly but slowly I'm gaining speed and getting closer to the guy up ahead of me.  What's great is I'm not tired at all !

Emil Coue' taught and believed the following statement:
" Every day in every way,
I am getting better and better. "

There were a couple of variations and he improved the
lives of many people.  I suggest to put the French Doctor  Emile Coue' on your bucket list.
Google him up and read about him.

I promise you, you will improve whtever
or wherever you want improvement.

" Be careful what you believe. "
- Roy Delgado

And remember:
" Whether you believe you can do something or not,
You are RIGHT ! "

( the important word, is believe. )

He told me he tried it and tried it, He went on to tell me that he KNEW it would NOT work !  He actually without knowing it, BELIEVED it would not work !
AND, AND, The idiot was RIGHT ! . . .RIGHT ?

"A man that does NOT read
is about the same as a man
that CANNOT read."

Roy Delgado
PO Box 1135, Petersburg WV 26847, United States
After high school graduation, I attended The Billy Hon School of Cartooning in Los Angeles. I then joined the U.S. Marines for four years. After military discharge in Washington, D.C. I attended The Corcoran School of Art in the nation's capital where I studied anatomy for two years. In 1976 I opened Roy Delgado's Sign Studio in Falls Church, Virginia where the company grew to a full service sign company including a complete sheet metal, welding and neon plant where the company grew to 32 employees and were involved in designing and manufacturing huge sign programs for IBM, McDonald's, Fuddruckers, Starbucks and many other Fortune 500 companies. The company was sold in 2001. I now live in my mountain-top home and studio in beautiful, wild and wonderful West Virginia with my lovely wife, Betty of 51 years and three cats, Midnight, Rocky ( as in Balboa ) and newly acquired Fast Eddie ( as in The Hustler ). I stay busy passionately drawing cartoons full time and my cartoons have appeared in The New York Times, The Wall Street Journal, Harvard Business Review, Barron's, Saturday Evening Post, Medical Economics, National Lampoon books, Reader's Digest, Playboy, Etc.